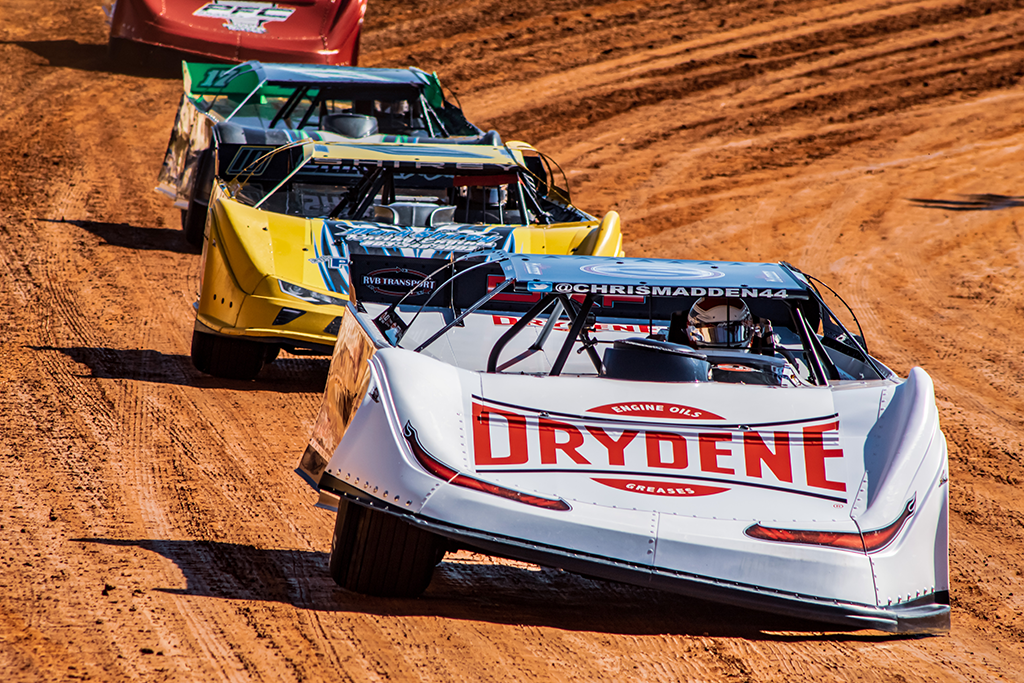 CONCORD, NC – Just seven months after the wrap-up of the inaugural year of competition for the revived Xtreme DIRTcar Series in February, Drydene Performance Products has returned as the title sponsor for its second year of operation, highlighted by a new six-race schedule and a redistributed $42,000 championship purse that spreads the funds throughout the top-10.

Drydene’s multi-year partnership keeps the iconic red-and-white color scheme of the historic brand and its lineup of engine oils and greases across the face of the Drydene Xtreme Series as part of its continued strong support of the Super Late Model community and dirt track racing. The Southeast’s premier Super Late Model talent will battle it out for the $15,000 championship prize, awarded at the season finale in February. An $8,000 prize will be awarded for the runner-up in points with $5,000 going to third place, $4,000 for fourth and $3,000 for fifth. Drivers must compete in all six races to be eligible for the points fund.

The 2020-21 Drydene Xtreme DIRTcar Series schedule welcomes four returning tracks to its schedule from the 2019-20 season and a single new venue into the mix. Kicking things off in the Palmetto State with the 30th running of the Blue Gray 100 at Cherokee Speedway on Sunday, Nov. 22, the stars of the Drydene Xtreme Series will go head-to-head with the regulars of the Carolina Clash Super Late Model Series in a $10,000-to-win co-sanctioned event that will crown the 2020 Clash champion.

South Carolinian Super Late Model veteran Chris Madden locked-up the inaugural championship in the season finale at Modoc Raceway in February, where the Drydene Xtreme Series will return once again in 2021 to crown a second champion on Feb. 27. $7,000 will also be on the line for the 40-lap Feature winner.

While other parts of the country will be covered in snow, Dirt Super Late Model fans around the world will be able to indulge in every lap of the Drydene Xtreme Series action live on DIRTVision presented by Drydene. Each of the events will also permit spectator attendance to see the new storylines unfold in person.

Who will hoist the second awarding of the Drydene Xtreme DIRTcar Series championship trophy at season’s end? Find out as the title chase begins at Cherokee Speedway’s Blue Gray 100 on Nov. 22, live on DIRTVision presented by Drydene!

The Series schedule is as follows: