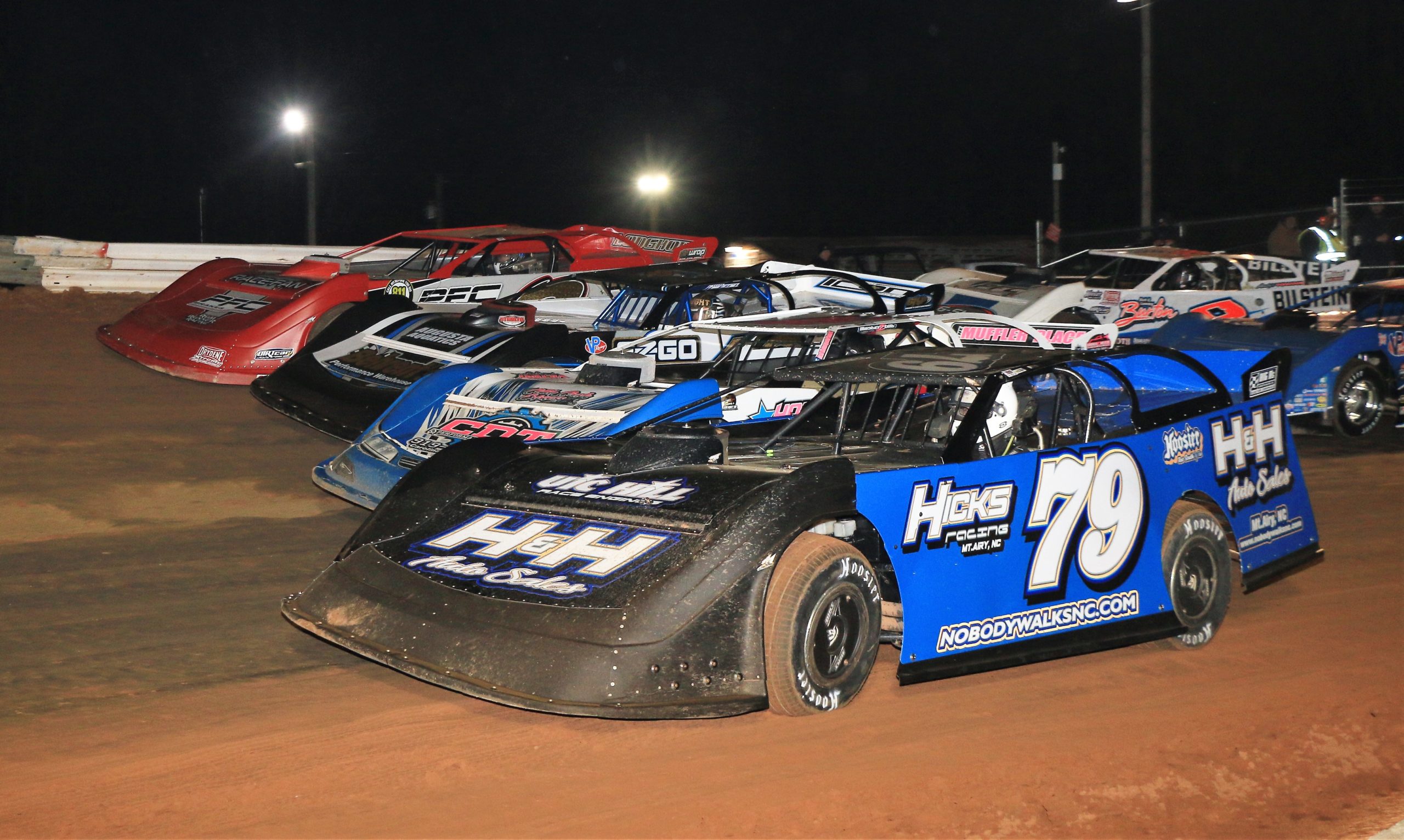 A storm of Southeastern Super Late Model talent is brewing in South Carolina this weekend.

For the first time in its history, the Drydene Xtreme DIRTcar Series faces three races in three days to close the season and crown a champion. It all begins this Thursday, March 24, with a return to Lake View Motor Speedway before the first-ever matchup against the national touring superstars of the World of Outlaws CASE Construction Equipment Late Model Series on Friday-Saturday, March 25-26, at Cherokee Speedway in the second-annual Rock Gault Memorial.

After five races, the points battle has reached a fever pitch. Ben Watkins, Ross Bailes and Carson Ferguson are all in the thick of a winter-long quest for their first Xtreme Series title; none willing to give an inch before the final checkered flag falls Saturday night. To the victor go the spoils – $15,000 worth of which will be awarded alongside the iconic Drydene oil barrel championship trophy to the one driver who can top the rest.

Don’t miss a moment of this exciting season finale – buy a ticket at the gate on race day, purchase in advance at worldofoutlaws.com, or stream every lap live on DIRTVision.

This past Saturday, Watkins and Bailes engaged in an epic pre-championship weekend throwdown in the Carolina Clash Super Late Model Series event at Lancaster Motor Speedway, trading the lead back-and-forth several times before lapped traffic stalled the battle and brought out caution. Watkins had the lead for the restart and drove away with the win, giving fans a taste at what’s to come this weekend with championship gold on the line.

STREET SMARTS – If there’s anyone in the Xtreme Series field that knows how to get around Lake View and Cherokee, it’s Ross Bailes. He’s got three races to make up a 16-point gap on the man who bested him last Saturday, heading into two of his best tracks in Xtreme competition.

The veteran racer from Clover, SC, won the inaugural Series visit to Lake View last year, defeating Matthew Nance in a race through lapped traffic. He’s got several wins at Cherokee, including the Xtreme Series’ second-ever visit in January 2020, and defeated the Outlaws there in May 2019 for his second win in two months against national-level racers.

Bailes has at least one Feature win at Cherokee in each of his last three seasons against drivers from the local, regional and national level.

DOWN, BUT NOT OUT – In what’s been a head-turning start to his Super Late Model career on the Xtreme circuit, Carson Ferguson has since lost the points lead he was tied for during the Lavonia weekend, getting caught in a wreck Saturday night and going off on the hook.

The 21-year-old rookie now faces a 40-point deficit to make up in the final three races. He’s never raced with the Series at Lake View but did have an impressive run from eighth-to-fourth over 100 laps of the Blue Gray 100 at Cherokee in November. Even better – he did it on one set of tires.

Ferguson’s championship rivals have the experience in points racing, but he has the drive. Piloting a high-profile ride for national championship-winning car owners Donald & Gena Bradsher of Paylor Motorsports, Ferguson would love nothing more than to win them their first Xtreme Series championship and bolster his own presence in the Late Model ranks.

FRIENDLY COMPETITION – For the first time in tour history, the Xtreme stars will go head-to-head with the World of Outlaws in a double-headed duel for big money.

The local and regional drivers will play defense on their home turf, racing to keep the Outlaws out of Victory Lane. Historically, the Southeastern heroes have been successful when the Outlaws make their annual invasions, winning six of the nine World of Outlaws Features contested at the 3/8-mile oval.

Watkins, Bailes and Ferguson will match up with the likes of Brandon Sheppard, Dennis Erb Jr. and Josh Richards and battle it out in the ultimate challenge for Southeastern supremacy.

BIG MONEY – Among the many other firsts this week is the potential for one driver to walk away with the biggest winner’s share in Xtreme Series history. A $20,000 check is up for grabs in the 60-lap Saturday night finale of the Rock Gault, succeeding a $10,000 grand prize on Friday night and $5,000 at Lake View.

Additionally, Lake View has posted an extra $2,000 bonus if any driver can win the Lake View race and one at Cherokee, plus a $5,000 bonus if someone can sweep all three.