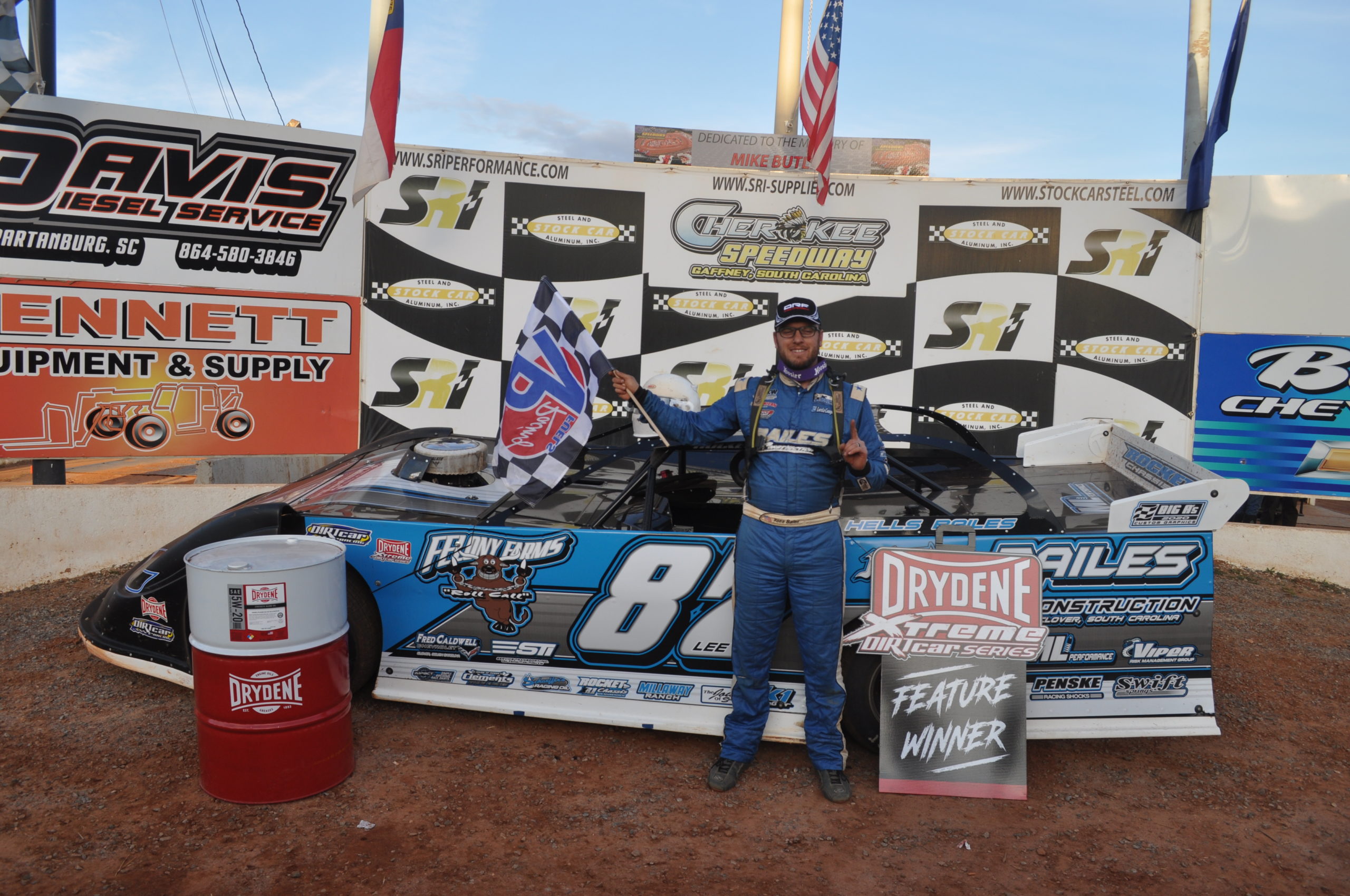 GAFFNEY, SC – It’s never easy to pull off the coveted “clean sweep” of the competition in a Super Late Model race, especially one at Cherokee Speedway against some of the Southeast’s best drivers. But Clover, SC-native Ross Bailes made it look easy on Sunday afternoon by leading every lap en route to his first career Drydene Xtreme DIRTcar Series victory over Casey Roberts and Johnny Pursley.

Bailes’ journey to perfection started in Qualifying, where he turned a burning lap of 14.568 seconds and set a new track record. From there, he went on to get the win in Heat 1 which set him up for an outside-pole redraw result.

Bailes grabbed the lead from polesitter Roberts right at the drop of the green and fended off an immediate hounding from the #101 in the opening laps. Using the preferred inside line to his advantage, Bailes was able to maneuver around any lapped traffic that stood in his way as he continued to click laps off.

The race’s only caution flag flew with just nine laps remaining, stacking the field up to Bailes’ rear bumper. Points leader Chris Madden was able to pick off Zack Mitchell on the restart for fourth after running inside the top-five the entire race, earning him yet another top-five finish as he retained his spot atop the overall standings.

But try as they may have on the ensuing restart, the rest of the top-five was unable to reach the back of the Bailes Construction Rocket Chassis #87. He led the field back to the checkered flag on lap 40 to collect $5,000 and the runner-up seat in the points standings.

“Those are hard to come by, where you can be fastest all night,” Bailes said with a big smile after the race. “We had a softer tire on than most of them, so I was trying to protect and make sure I had a tire at the end, but Casey was right there with me. Just a great night for us.”

By now, Bailes has essentially “been there, done that” with most things at Cherokee. Taking home double Sunday’s winner’s share last May in Gaffney for his victorious efforts against the World of Outlaws Morton Buildings Late Model Series, Bailes really had quite the season going to that point. An untimely exit from the Barry Wright Race Cars house program in the fall left him without a ride, but he soon called up Rocket Chassis, who fixed him up with a brand-new car for the 2020 season.

Just 26 days into the new year, and it’s already paying dividends. He now sits second to Madden in overall points with one fewer start than everyone else inside the top-five.

“Rocket – they build a great car. We came and tested the other week and got it dialed in and fitted for me. Right when we unloaded, it felt great for me, and felt great all night,” Bailes said.

Roberts stayed in the two-spot through all 40 laps, maintaining pressure on the leader through traffic. At one point early on, he got a great run into Turn 3 and pulled right up beside Bailes but was unable to make it stick out of Turn 4. Roberts said tire choice had quite a bit to do with his ability to stay with the leader throughout the race.

“Really, I think we had just as good of a car as [Bailes] did, it was just about track position,” Roberts said. “He went with a little softer tire, so he fired better on the start which allowed him to get out front. Once my tires heated up, we were right there with him.”

Like Roberts, Johnny Pursley held his #9 inside the podium for the entire race, also providing a great deal of pressure on the car in front of him. Getting a good jump from outside row-two on the start, Pursley held the third spot all the way to the checkered – a finish he said isn’t typical for his team in a warm, afternoon setting.

“We’re just glad to get a good finish in the daytime. We struggle a lot in the daytime. We’ve got a new crew chief, and we hit on some stuff today, so I think we’re gonna be pretty good [going forward],” Pursley said.

Coming into the race, fellow South Carolinian Trent Ivey was sitting third in overall Xtreme Series points. Early on in Sunday’s Feature, he seemed to be having a decent run going in the top-10 but retired his #88 Ivey Construction Longhorn Chassis with just a few laps remaining – a reported fuel line malfunction ending his day.

It’s time for the season finale at Modoc Raceway! The Drydene Xtreme DIRTcar Series heads to Modoc, SC, for the final race of the Series on February 29, where an inaugural champion will be crowned and awarded the $20,000 points championship check!

Don’t miss a moment of the action – get yourself a DIRTVision Fast Pass subscription today and watch every lap of the upcoming Speedweeks action from Volusia Speedway Park PLUS the big Xtreme Series finale LIVE from Modoc in February!