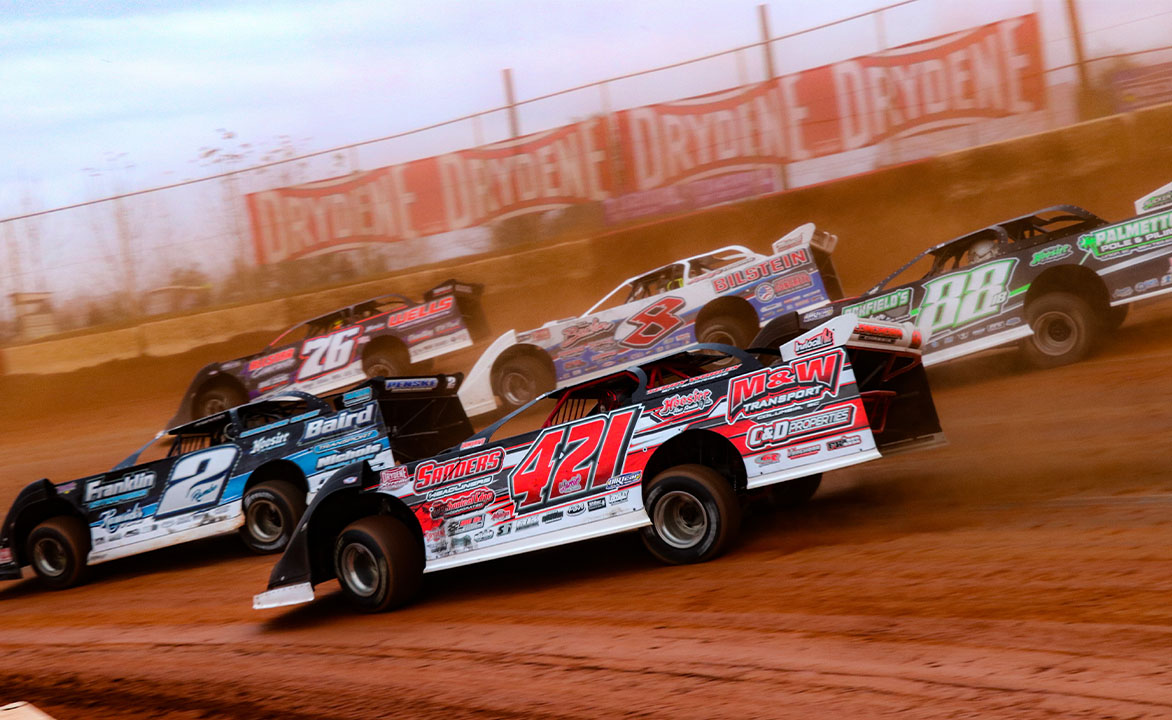 A pair of races in the Palmetto State kicks off the third installment of the Drydene Xtreme DIRTcar Series this weekend.

The Series makes its first-ever stop at the Lancaster Motor Speedway on Saturday, Nov. 20, for the Palmetto State 50. Drivers will battle for $10,000 in a 50-Lap Showdown to see who gets a leg up on their competition.

The tour moves Northwest on Sunday, Nov. 21, for a trip to Cherokee Speedway and the highly anticipated Blue Gray 100, paying $10,000-to-win. It’s the fifth time the Drydene Xtreme DIRTcar Series has stopped at “The Place Your Mama Warned You About,” and the first of two stops on the schedule this season.

If you can’t make it to the track, you can watch all the action live on DIRTVision – either online or through the DIRTVision App.

Here are some of the storylines to keep an eye on this weekend:

Feels Like the First Time: This winter’s version of the Drydene Xtreme DIRTcar Series starts with a new venue as the tour visits Lancaster Motor Speedway for the first time.

It’s the sixth track The Most Xtreme Late Models in the Southeast have visited all-time.

While the Series makes its first stop at Lancaster, it’s not the first Palmetto State 50. It’s the third time the race has been held at the 1/2-mile facility. Zack Mitchell won last year’s event, while Chris Ferguson took the checkered flag in 2018.

Big Sexy Looks to go Back-to-Back: Brandon Overton only made two starts with the Series last winter, and he made the most of them by finding Victory Lane. One of those starts was the 2020 edition of the Blue Gray 100.

While Overton’s found success all over the country, Cherokee has been his wheelhouse in 2021. Since Labor Day weekend, the Evans, GA driver won a combined $50,000 in two races at “The Place Your Mama Warned You About.”

Carolina Boys: Two drivers to watch this weekend at both events are Trent Ivey and Daulton Wilson.

Both drivers finished top-five in Series points a year ago and have made a statement against some of the best drivers in the country.

From Union, SC, Ivey brought home a top-five during the Rock Gault Memorial at Cherokee in September. Wilson, from Fayetteville, NC, had a top-five in the Mike Duvall Memorial in October. Wilson also won a race at Cherokee earlier this month.

Schedule Change: When the Drydene Xtreme DIRTcar Series schedule was released in July, a trip to I-75 Speedway in Niota, TN was set for Friday, Dec. 3. That event is now on Sunday, Dec. 5.

It’ll be the first time the Series will race at the 3/8-mile track.